In early 2017, a number of grassroots community groups started to organise against the plans of Dalradian Gold Ltd to start exploiting the Curraghinalt gold deposit in the hamlet of Greencastle, Co. Tyrone.

Greencastle sits on top one of the world´s biggest unexcavated gold deposits, worth an estimated 3 billion pounds. Dalradian Gold Ltd was founded in 1971, but its activities in the north of Ireland were delayed during the “Troubles”.

They are the Irish subsidiary of Dalradian Resources Inc., a Canadian mining company that was bought in 2018 by Orion Resource Partners, a US based investment fund. It's already twisted enough.

Groups such as Save Our Sperrins, Greencastle People’s Office (GPO), Cooperate Against Mining in Omagh (CAMIO), Communities Against Mining and Love Tyrone have been linking up with each other and tirelessly campaigning since then. As part of ongoing support and solidarity efforts locally, we spoke to one of the groups, the Greencastle People's Office (GPO), who don't even describe themselves as activists or a group at all, but as ordinary families, local residents or a community defending their life and their health in the face of pollution and despoliation. 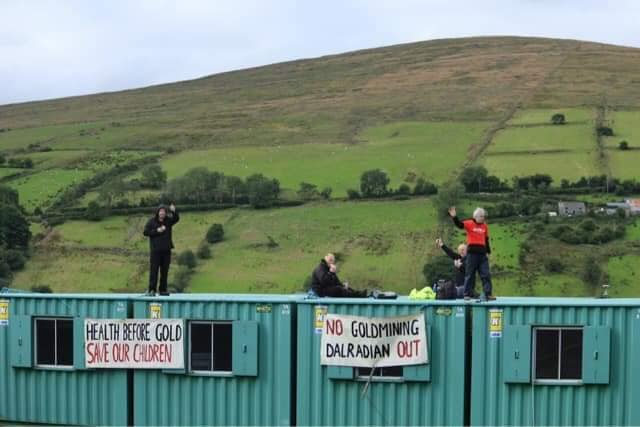 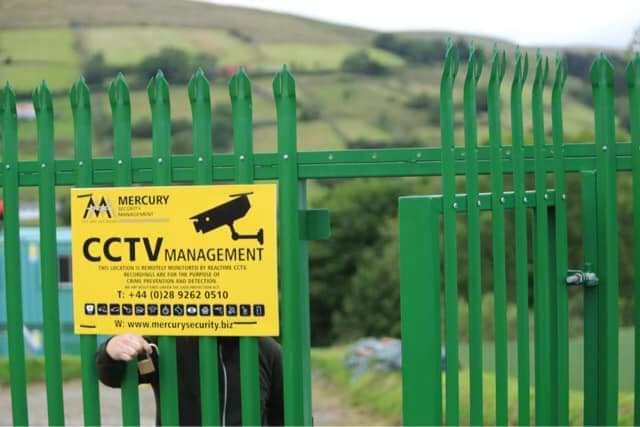 After Dalradian submitted its 10,000 page application for the mine, the folks at the GPO took the time to read it page by page, and gather the evidence against the disastrous consequences of the project, helped organise talks and public meetings throughout County Tyrone and the North West.

More recently, as with the case of other environmental or anti-mining campaigns internationally, be it in Asia, Africa or South America, the threat of intimidation and police harassment has dramatically increased, resulting in verbal to physical threats, arrest and even detention. All in an effort to subdue or silence objections to the proposed toxic gold mine by Dalradian.

However, as part of their campaign of direct action against the multinational company they resorted to locking themselves to drilling equipment and even occupying the roofs of Dalradian's site in Greencastle in opposition to their proposed toxic plans. As we arrived at their headquarters, which is a couple of caravans placed on the site of the proposed mine, we were warmly welcomed with a cup of tea and biscuits.

How did the local residents react to the GPO?

We have a lot of support. The good thing about the GPO is that everybody owns it. There is no such thing as a hierarchy, there is no chair, there is no secretary. We always have an open door. You just come in and put that kettle on. They can't break down a structure that is not there. Nobody owns this campaign.

Who owns the caravans?

We don't know. It just appeared here one day!

So, who takes the decisions?

Whoever comes up with an idea, that's the idea that is going to be worked on. We run the idea and if someone feels bad about it, it will not be done. We don't even vote. At the end of the day, if you can sit and explain your idea to everyone, and there are no negatives, it's done. We work on a few basic principles: exercise your right to peaceful protest, know the law and your rights, and don't just go for the company. You go through all the ramifications, always thinking outside the box.

Dalradian was set up in 1971, but there has been an interested in mining in Ireland long before that. And it's not just gold, there are a number of other minerals. It makes you even wonder about the relations between the “Troubles” and the interests of these giant corporations. This is capitalism on steroids.

Do you feel abandoned by the political establishment?

Totally. But this actually has worked to the benefit of us, because rather than putting our heads down, it made us lift our heads. Politicians have been involved from the beginning, but on the other side. And the big parties are all in this together. Politicians are no benefit to anybody. People have to start to realise that. They have their own agendas and the will lie through their teeth to get whatever they need from communities or people or anybody else. Direct action is the only way forward.

What about out community groups?

We've actually seen that happen to one of the groups that were originally really involved. They went to the politicians and they believed everything they were told. They believed that the political parties were going to save the day. So the group stopped organising protests, they stopped talking and went really quiet.

Dalradian has invested a lot of money in promoting their image in paid ads that look like articles in the local press. In contrast, there has been an almost total media blackout of your side of the story. Has Dalradian done anything to discredit your campaign?

We have two files with evidence of online threats, false accusations against us, threatening anonymous phone calls and even some of the people involved with the GPO have experienced physical violence from Dalradian sympathisers. All of these have been reported to the PSNI and everything has been completely ignored.

Where do you get the energy to keep fighting this giant corporation?

We have no choice. These are our lives and our children's lives. If this caravan hadn't been here from the beginning, you can be sure that the mine would have been on here by now. The Fermanagh and Omagh District Council came twice to fix eviction notices, to move the caravan off the grounds.

At one point a second caravan popped up, so they sent out a couple of officials to give us the notices in person. We refused to take them, so they decided to fix them on the caravans. They had "Caravan 1" and "Caravan 2".

We pointed behind them at a third caravan that had appeared overnight off in the trees and asked them, what about Caravan 3? They looked at each other in disbelief and left. That was the last time we saw them. We have no intention of going anywhere and we’re adamant that there will be no mine in Greencastle.

How Can You Help?

You can contact the different groups listed here via their social media pages, keep up to date with what is happening and to express your support.

You can send letters or Post card of objection directly to Dalradian Gold Ltd to the following addresses and demand an immediate end to Toxic Gold Mining and to increased harassment of the people of Greencastle.

Organise talks, pickets and protests to highlight the fight against Toxic Gold Mining.

Write to the following addresses: